Gator Wizz Review
A Closer Look Into The Product

This Gator Wizz review was last updated in February 2023.

As employers get more and more aggressive in their quest for personal information about their employees, drug tests become more and more common.

An idea that was initially designed to ensure pilots and long-haul truckers weren’t shooting up before they reported for work is now being used to persecute loyal, sober-minded, hardworking employees like yourself.

If you’re going to hold onto your job and keep your private life private, you need help.

But, is this product the real thing or just another money pit?

What is Gator Wizz? 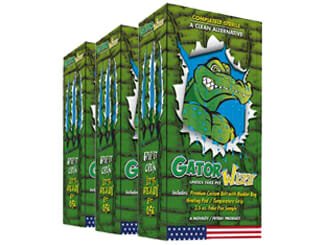 This company is known mostly for its range of detox products, including detox mouthwash, drinks, shampoo, and a home test kit.

They also produce another premixed product called 420 P Clean, which got the company in some legal trouble when a competitor (Spectrum Labs, makers of Quick Fix) accused them of stealing their formula.

It’s impossible to say, without subjecting Gator Wizz to rigorous scientific testing, whether this is actually just 420 P in a different package.

The bottom line, however, is that Gator Wizz is a fake pee kit that Dr. Greens markets as a novelty fetish item, but which most people know is really for dealing with drug tests.

It comes premixed, which is a plus, and also provides a belt and heating pad to help ensure your sample gets to the cup safely and at the right temperature.

What’s in this Fake Pee Kit? 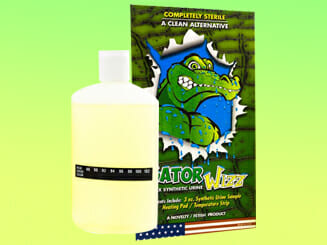 Like we said, the Gator Whizz fake pee product is more than just a specialty brew for the fetish community.

It’s a kit that includes a bag to hold the pee, a heating pad to keep it warm, and an adjustable belt to get your sample past prying eyes.

The company states their fake pee is “unisex” — which is a completely meaningless claim, because no standard drug test on earth checks for male or female hormones.

They also state Gator Wizz fake pee is “a clean alternative” — which it better be since it’s man-made.

What’s disturbing is that they don’t state upfront whether their fake pee is pH balanced like human pee.

You just have to trust them.

But in the real world, “trust” and “clean drug test” don’t necessarily go hand in hand.

Yeah, But Does it Work? 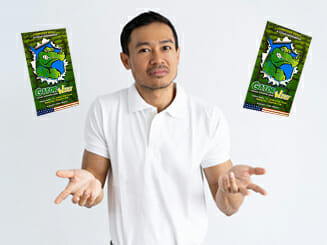 The Gator Wizz fake pee kit certainly touches all the bases when it comes to what you’d expect to see in a kit.

It has the bag to hold the pee, the belt to deliver the bag, and the heat pad to keep it warm. It even has a strip attached to the bag so you can monitor the temperature of the sample.

However, such strips aren’t really reliable, since everything from the air temp to your body heat can cause the reading to get screwy.

But, the (probably) useless built-in thermometer isn’t the real problem with this brand of pee.

The real problem, as we alluded to above, is the fact that you don’t really know what you’re submitting when you hand your sample over.

Is it properly pH balanced? Does it contain urea?

The last thing you want when you’re already stressed about a drug test is more stress based on the unknown.

If you spent your money on something better instead, you’d know exactly what you were submitting.

It’s also a product with a long list of satisfied customers and a reliable track record; both of which are things we want to see in a product.

Don’t get us wrong; we’re not saying that Gator Wizz isn’t properly formulated.

Only that they don’t bother to tell us — which should raise some red flags right off the bat.

How Much Does Gator Wizz Fake Pee Cost? 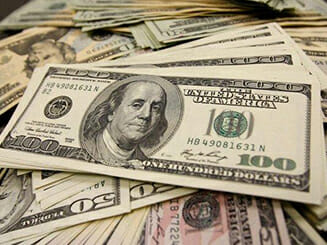 The makers of this kit charge $50 for it.

So why the elevated price point?

Maybe they’re trying to recoup legal expenses they incurred defending their 420 P Clean in court from charges of product theft.

If it were up to us, we’d opt for something better.

With Clear Choice Sub Solution, you know it’s pH balanced and that it contains the other things testing machines expect to see, like uric acid, creatinine, and the same specific gravity as human pee.

Plus, it costs less.

Where Can I Buy It? 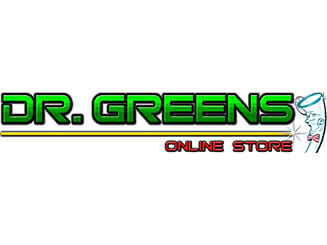 Gator Wizz is the kind of product that’s going to appeal to risk-takers.

So if that’s you and you love uncertainty, then head over to drgreens.com where you can buy all the Gator Wizz your heart desires.

But why would you?

Even risk-takers should know that when it comes to drug testing uncertainty should be the one thing you’re trying to minimize.

As such, we’d opt for something with a reliable track record and lots of satisfied customers, like Clear Choice Sub Solution.

What should the temperature of Gator Wizz be?

The temperature of Gator Wizz should be between 94 and 102 degrees Fahrenheit as that is the normal range for human body temperature. If your sample falls outside that range, then you will likely fail the test and be flagged as a fake sample.

Can you utilize Gator Wizz again?

Yes, you can utilize Gator Wizz again after opening the bottle, and you can reheat it a few times as well. However, avoid doing this too often as it will change the chemical gravity, which could be picked up by the testing facility.

Can you find a temperature strip inside Gator Wizz’s package?

Yes, you can find a temperature strip inside Gator Wizz’s package, and it’s already attached to the side of the sample bottle. Make sure you know how to read it before you head for the urine test to make sure you can quickly check if it’s ideal before you enter the lab.

Can you put Gator Wizz in the fridge?

Yes, you can put Gator Wizz in the fridge to make sure it lasts longer. After you open the bottle, this is the best way to store it, as it will reduce the risk of some of the water evaporating.

Can you purchase Gator Wizz in stores?

No, you cannot purchase Gator Wizz in stores, and currently, it is only available with certain online stores. The benefit of this is that you save some money, and you won’t end up with a counterfeit product that might fail the test.

Does Gator Wizz have a fetid smell?

Yes, Gator Wizz has a fetid smell which is created by the ingredients it contains. With uric acid and urea, along with a few other proprietary components, the sample will smell the same as real human piss.

What substances can be seen in Gator Wizz?

The substances that can be seen in the Gator Wizz package are a 3-ounce bottle of the fake sample, a heating pack, and a temperature strip that you can find on the side of the container. It’s all you need to get prepared for a urine test.

Can we recommend Gator Wizz?

Maybe they make a great home test kit. And, maybe someday they’ll put a little effort into customer service and be more forthcoming about their phony pee.

But until that day, we’re going to give the Doctor a pass.

We recommend you use high-quality products instead, such as Clear Choice Sub Solution.

You’ll get everything you would get in the Gator Wizz fake pee kit, and you’ll save a few bucks in the process as well.

Plus, you can rest easy knowing exactly what you’re submitting, and that Clear Choice Sub Solution has a long history of helping people successfully navigate the minefield of intrusive drug tests.