This Golden Flask review was last updated in July 2022.

As the scourge of company-administered drug tests spreads like an oil slick across the employment landscape, average people are finding it more and more difficult to maintain a private life and a job at the same time.

The fact that you could have your career ruined by a test that shows you may have had a couple of hits off a joint in the past 3 weeks is insane.

As such, you need something that will help you balance the scales, and Golden Flask wants to be the solution you’re looking for.

Below, we’re going to take a close look at the Golden Flask synthetic urine product and see if it’s worth the asking price.

What is the Golden Flask Synthetic Urine? 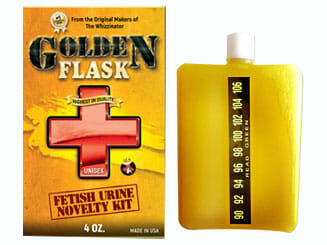 The Golden Flask is a relative newcomer to the synthetic urine business.

It first appeared about 2 years ago and is the product of a company called Alternative Lifestyle Systems, or ALS.

ALS has a, let’s say “interesting,” product line that includes adult toys and a strap-on prosthetic penis, with a tube down the center for dispensing a sample called the “Whizzinator.”

Nothing illegal, mind you; just an eclectic product line that happens to feature some related items.

The company hopes you’ll use their fake urine in concert with their Whizzinator, instead of opting for a better known and proven product like Clear Choice Sub Solution.

The marketing on their site describes the Golden Flask Synthetic Urine as being “world famous,” which indicates these guys aren’t above a bit of exaggeration.

That aside, the company is banking on the notion that the drug testing phenomenon has created a sufficient number of desperate people to support their entry into the fake pee market.

And so, we have the Golden Flask Synthetic Urine — which proclaims with a hearty wink-wink to be fetish urine, not to be used for illegal purposes. 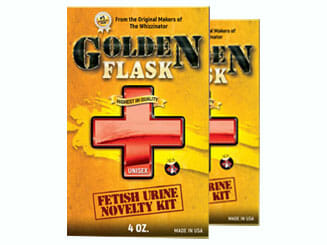 To the company’s credit, their Golden Flask fake urine kit is more comprehensive than some others that simply give you a packet of dried fake piss and a hearty “Good luck.”

The marketing also boasts about the “believable smell” of this fake urine, but we beg to differ.

More on that in a moment.

The Golden Flask Synthetic Urine kit comes with 4 ounces of premixed synthetic urine in a sleek plastic urine flask, a heating pad to help you bring the pee up to a realistic temperature, and a temperature strip that’s already affixed to the bottle so you can monitor that temp and instructions.

All of that is great, and we applaud them for going the extra mile and trying to deliver value to their customers.

Where we diverge is in the smell of the product.

If your piss smells like this, it’s time to visit the doctor.

Not that it’s particularly foul, just weird. We can’t think of anything else that smells like it. Especially urine. 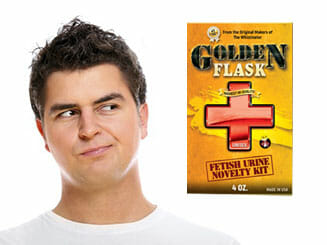 Well, let’s put it this way. We wouldn’t be as hesitant to use this as we would to use some other synthetic urine products.

And, who knows? Maybe you’ll get a testing technician who can’t smell human urine — or at least you better hope you do.

Because, even if you get your human urine sample past them and deliver it either straight from the bottle or through a strap-on (which we don’t recommend), the unusual odor is bound to get someone’s attention at some point.

Either while you’re still there, or later when the cup is uncapped for the urinalysis drug test.

In addition, a quick check of online feedback suggests that our observations about the product’s characteristics (the color is a bit surreal as well) are not off-base.

A number of people report failed drug tests when using the product.

Some blame themselves, thinking they just didn’t know how to use the Golden Flask synthetic urine.

But, we have a pretty good idea what the true cause of those failures is.

At the same time, however, others report that they got through their drug test without any problem or incident.

So, there are definitely mixed signals coming from the people who actually use the Golden Flask synthetic urine.

If it were our test, we’d just fall back on the drug test reliability of better synthetic urine brands and eliminate the doubt.

How Much Does This Product Cost? 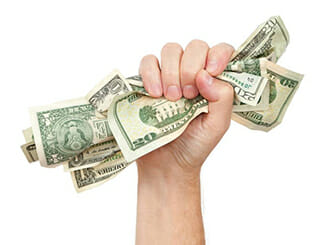 The Golden Flask synthetic urine isn’t the most expensive kit on the market, nor is it by any means the cheapest.

45 bucks is more than you’ll pay for better brands so, in our books, the Golden Flask has to offer something extra in order to justify that additional expense.

Something like a guaranteed 100% success rate on drug tests.

And since they can’t offer that, we would just stick with what we already know will work and maybe revisit ALS at some point in the future to see if they’ve worked out some of the kinks.

Where Can I Buy Golden Flask?

If you’re feeling lucky, you can go ahead and purchase this premixed synthetic urine through the ALS website, charmingly known as: thewhizzinator.com.

There, you can pick up all the Golden Flask you want, along with a prosthetic penis to freak out your friends at parties.

With your career on the line, it’s no time to take chances on unproven products like this.

Do yourself a favor and opt for a known quantity like Clear Choice Sub Solution instead.

Hell, you’ll even save a few bucks.

What is the best temperature that Golden Flask should be?

The best temperature that Golden Flask should be at is between 94 and 102 degrees, to ensure that it falls within the normal range of human body temperature. If it’s too hot or cold, then the lab test will immediately pick it up as a fake human urine sample.

Can you rework Golden Flask?

Yes, you can rework Golden Flask unisex synthetic urine after opening it and not using the full amount. If you only need to submit a small sample, then this is an excellent way to get more value from your investment. Just avoid reheating it too often, which could change the gravity.

Can you find a temperature strip inside Golden Flask’s box?

Yes, you can find a one inside Golden Flask’s box. It’s a large strip that is already attached to the side of the sample bottle, making it very easy to read. You’ll also see a small green strip together with the package.

Can you quick-freeze Golden Flask?

Yes, you can quick-freeze Golden Flask if you need to store it for a longer period. However, one thing not to do is regularly defrost the sample, as this will impact the chemicals and can ultimately lead to a failed urinalysis drug test.

Can Golden Flask be purchased in stores?

No, Golden Flask cannot be purchased in stores or other regular retailers. You can only buy it online from its makers or a few eCommerce stores. This reduces the risk of getting a fake product and failing the test.

What can you find in the Golden Flask package?

You can find a 4-ounce sample bottle, temperature strip, heating pack, and a rubber band in the Golden Flask package. Along with easy to follow instructions, you’ll have the synthetic human urine sample prepared in a matter of minutes.

So, are we recommending this product?

As the Golden Flask is a new product, we’re willing to cut them some slack and revisit it at a later date to see if they’ve worked out the odor and color issues we mentioned above.

But for now, we can’t in good conscience recommend something with such flaws.

We’re recommending Clear Choice Sub Solution instead because of its positive track record and good quality. And, because we want you to keep your job.